The BYU Humanities Center’s Annual Symposium will be held Friday, September 24th on BYU’s campus and Saturday, September 25th at Sundance Resort. The symposium will feature guests from around the world and will focus on belief, what it is and what it means today. We hope you’ll join us.

Click here for a look at the schedule: https://humanitiescentersymposium.byu.edu/schedule-3/

Belief is a curious phenomenon in our postmodern, posthuman age. If anything, per Jean-François Lyotard, our present era is best characterized by its loss of belief, especially in grand narratives. Religion, a principal site of grand narrative and a bastion of belief, has seen its influence gradually wane in recent decades. And while the deterioration of strong faith traditions gives way to a virtually endless array of totemic icons (presenters at the most recent conference of the American Academy of Religion appealed to the mystical properties of sci-fi, comic books, and The Hunger Games), the cultural objects in play seem to devolve less on deep psychic investments than on something like user friendliness and circulation. Indeed, for this new mysticism, belief almost seems to be an indication of bad faith: one does not believe in cultural objects as much as like them, work out one’s identities and find one’s communities (of the “like”-minded) through them. In this way, cultural icons do not serve as the oracles of other worlds that may actually exist as much as function as projective mirrors that reveal us to ourselves. They make our brave new world, the world as we know it, a little more manageable, a little more “friend”-ly. 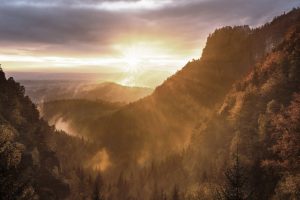 The new mysticism – hipster religion, if you will – thus shares epistemic space with the “alternative fact”: each enables representations of contiguous realities for the purpose of absolving its enthusiasts from the compulsions of conversion, those uncomfortable changes of life and behavior that attend traditional belief. The Hunger Games may demand one’s time and money, but not to the same extent as a deep religious vocation. And by what, finally, would we be called, anyway? If conversion makes little sense today this is because, at core, we have little faith in anything (whether God or climate science) that would truly compel us to change. We “believe” – that is, we “like,” we “use,” we “connect” – because we no longer believe.

Then again, perhaps this overstates things. For, at the most elemental level, bacteria believe. Algae believe. All life forms believe, and necessarily so, argues N. Katherine Hayles, inasmuch as belief is a feature of evolving existence. She draws here from the work of the biologist Ladislav Kovaç, who defines the beliefs of organisms as a kind of embodied knowledge predicated on suppositions about the environment and the adaptations most likely to ensure survival. “If we take a mutation in a bacterium as a new belief about the environment, we can say that the mutant would sacrifice its life to prove its fidelity to that belief.” Hayles’s larger point is that the line separating humans from other organisms, including technological systems, is very thin. “[T]echnical systems are self-evidently not informationally closed but accept information outputs of various kinds and generate information outputs as well.” Machines, too, act on beliefs. As do poets: “If you don’t believe in poetry, you can’t write it,” Wallace Stevens observed.

It thus seems fair to ask whether belief has truly waned in our postmodern era, or whether it has simply evolved, or whether all such apparent differences are illusory. More fundamentally, it raises the question of what belief is, and of what it means, today. What forms does it take and inspire? What are its objects and sources? Its benefices and dangers? Our symposium, jointly sponsored by the BYU Humanities Center and Belief: An Interdisciplinary Journal of the Humanities, will serve as the occasion for rigorous discussion of these and related questions.

A Conversation, Not Only About Trees

Secularism and the Humanities

The Capacity of Literature to Develop Empathy

When the nation, suicidal

Spiritual Exercises in a Humanistic Register (I): Pierre Hadot

Disability, Grace, and Life Beyond the Meritocracy, with guest Amy Julia Becker